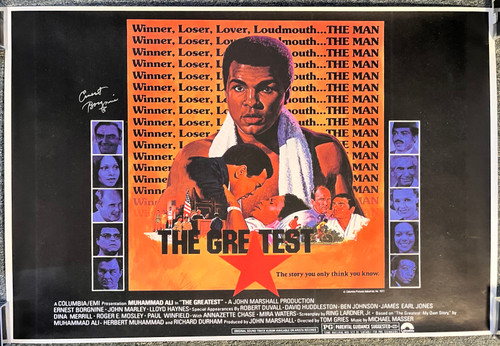 A very unique piece of movie/Ali memorabilia.  This is a reproduction 27x40 movie poster from the 1977 movie "The Greatest."
Hollywood legend Ernest Borgnine (who played Angelo Dundee, Ali's trainer, in the movie) has autographed this reprint poster.  A&R Collectibles Certificate of Authenticity included for the autograph.
Buyer will receive actual signed poster displayed in our images.  Unframed.
The Greatest is a 1977 film about the life of boxer Muhammad Ali, in which Ali plays himself. It was directed by Tom Gries and Monte Hellman. The song "Greatest Love of All", later remade by Whitney Houston, was written for this film and sung by George Benson. The movie follows Ali's life from the 1960 Olympics to his regaining the heavyweight crown from George Foreman in their famous "Rumble in the Jungle" fight in 1974.  The movie is based on a book written by Muhammad Ali, Herbert Muhammad and Richard Durham.
Ernest Borgnine (born Ermes Effron Borgnino) is an American actor of television and film. His career has spanned more than six decades. He was an unconventional lead in many films of the 1950s, including his Academy Award-winning turn in the 1955 film Marty. On television, he played Quinton McHale in the 1962–66 series McHale's Navy and co-starred in the mid-1980s action series Airwolf, in addition to a wide variety of other roles. Borgnine is also known for his role as Mermaid Man in the animated television series SpongeBob SquarePants. Borgnine earned an Emmy Award nomination at age 92 for his work on the series ER.

A sneak preview theatrical trailer for Tom Gries' 1977 film "The Greatest", a biography of Muhammad Ali with the champ playing himself. Cast members Ernest Borgnine, James Earl Jones and Dina Merrill are on hand to explain their enthusiasm of working on the picture.