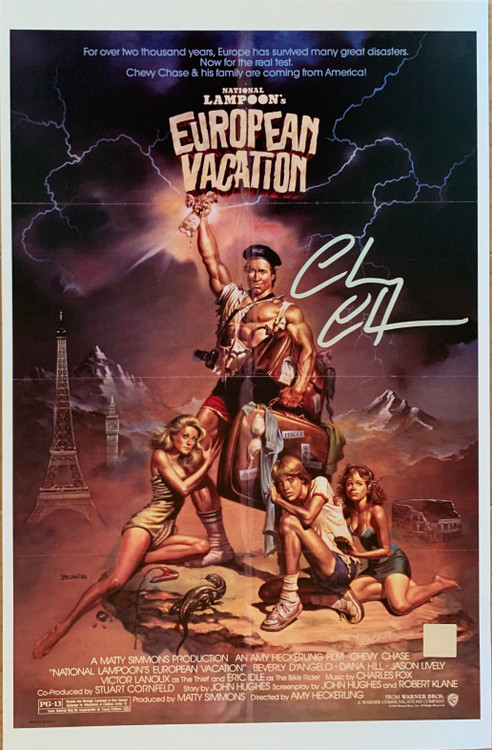 European Vacation Chevy Chase Signed 11x17 Replica Movie Poster. Both Superstar Greetings COA and signing photo included. This movie poster (in it's original full size) was originally issued folded. This replica poster shows the fold lines that were included in the original (but is not actually folded).

Buyer will receive item shown in our images.

European Vacation (originally given the working title Vacation '2' Europe) is a 1985 comedy film. The second film in National Lampoon's Vacation film series, it was directed by Amy Heckerling and stars Chevy Chase and Beverly D'Angelo. Dana Hill and Jason Lively replace Dana Barron and Anthony Michael Hall as Griswold children Audrey and Rusty. After Hall declined to reprise his role (he decided to star in Weird Science instead), producers decided to recast both children.

This, along with Hotel Hell Vacation, was the only Vacation film that did not feature Randy Quaid's "Cousin Eddie" character. Also, in European Vacation, the family's name is shown as "Griswald", though in every other film it is spelled "Griswold."

This is a trailer I produced years ago for interactive TV network Intertainer. This is the second film in the VACATION series. It stars Chevy Chase and Beverly D'Angelo and features cameo appearances from Robbie Coltrane, Paul Bartel and Eric Idle. It was directed by Amy Heckerling.