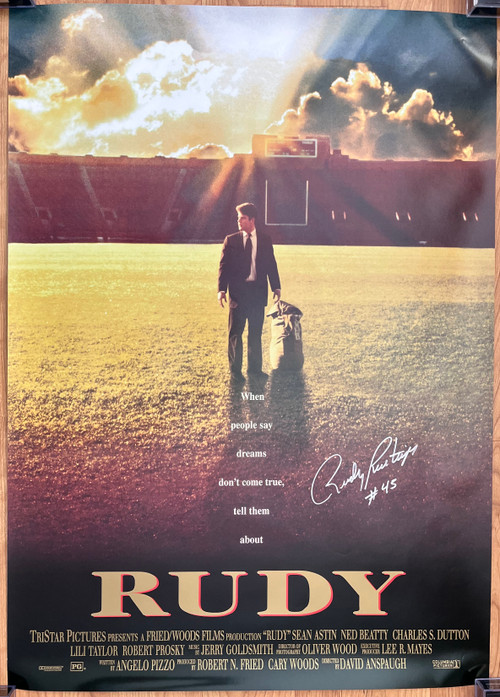 Buyer will receive actual signed poster displayed in our images.

After Parseghian stepped down after the 1974 season, Dan Devine was named head coach. In Ruettiger's last opportunity to play for Notre Dame at home, Devine put him into a game as defensive end against Georgia Tech on November 8, 1975. In the movie Rudy, Devine is given a somewhat antagonistic role, not wanting Rudy to dress for his last game. However, in actuality, it was Devine who came up with the idea to dress Rudy. In the final play of Ruettiger's senior season with the Fighting Irish, he recorded a sack, which is all his Notre Dame stat line has ever shown. Ruettiger actually played for two plays. The first play was a kickoff, and the second (and final) play he sacked Georgia Tech quarterback, Rudy Allen.  Ruettiger was carried off the field by his teammates following the game.

The Making of The Movie Rudy Behind Scenes 03:09

http://www.rudyinternational.com The Making of The Movie Rudy Behind Scenes Behind the scenes on the set of Tri-Star Pictures 1993 feature film 'Rudy Rudy follows the life of a young man named Rudy Ruettiger (played by Sean Astin), who grows up in a working class family in Joliet, Illinois in the 1970s. Rudy's only dream in life is to play football for Notre Dame, but he's a slow learner - his grades in high school wouldn't even get him onto the campus of a community college. So when he graduates, he ends up working in the local steel mill just like his father (Ned Beatty) and older brothers. The only person who believes in Rudy's dream is his friend Pete. But when Pete is killed in an accident at the mill, Rudy realizes that he's wasting his life - if he wants his dream, he's gonna have to go out an get it. So with little money and no place to stay, he gets on a bus for South Bend. There, he's befriended by a Catholic priest, who gets him into nearby Holy Cross Junior College. The plan is that if he can make the grades, maybe he can transfer to Notre Dame and then try out for the team's practice squad. Rudy is also befriended by a janitor (Charles Dutton) who gives him a job and a place to stay, and a fellow student, who helps him with his classwork. But just getting accepted to Notre Dame isn't going to be Rudy's only challenge. How do you win a spot on one of the country's best football teams when you stand five foot nothing and weigh a hundred and nothing? I think the real beauty of Rudy is that it isn't just about football and it isn't really about winning the big game. It's about heart. It's about chasing a dream. It's about never giving in when people tell you that what you're trying to do is foolish. Some might call that crazy, but not me. Funny thing is, all those things I just mentioned - heart, hard work, determination, perseverance - that's what football is all about. Add to all that a really great supporting cast (which also includes Lili Taylor, Vince Vaughn, Robert Prosky and Jon Favreau) and a moving score by composer Jerry Goldsmith, and you've got a winner. On DVD, Rudy delivers good looking anamorphic widescreen video. This isn't the best film transfer we've seen from Columbia TriStar - there's some dust and dirt evident here as well as a little too much edge enhancement. The print also looks a little soft on occasion. But the colors are really nicely rendered. They're rich when necessary and muted at other times by design, but they're always accurate. The contrast is also wonderful, with good deep and detailed blacks. The audio is about on par with the video. The disc includes a remixed Dolby Digital 5.1 soundtrack that boasts good clarity and some nice ambiences. It still can come off sounding a little flat at times, but it gets the job done and the score sounds terrific (note that the score is also available in 5.1 on an isolated track - a nice touch). The 2.0 track is fine for those who will use it, and 2.0 audio is also available in Spanish. Columbia TriStar calls this disc a special edition. I don't know if I would, however. The disc does include a trio of behind-the-scenes featurettes, but let's take a closer look at them. One (First Down with Sean Astin) is nothing more than a 1 minute interview with the film's lead. Another is a "making of" fluff piece of the kind that is typically put together by a studio to promote a film. It's okay, but you're not going to learn anything new (and it only runs 3 minutes). By far the best thing on this disc is a 13-minute look at the real Rudy Ruettiger, who talks about his life and his achievements compared to what we see in the film. There's real emotion to be found here, and it's a very moving and interesting piece. Rounding out the disc are talent files and a pair of trailers for Brain's Song and Jerry Maguire (but oddly not Rudy, which probably means that they couldn't find one or the quality wasn't up to par). There is one thing here worth mentioning - a bone I'd like to pick with Columbia TriStar's marketing folks (and something we've been complaining a lot about recently here at the Bits). What were you guys thinking by showing the film's ending on the cover?! Why not use this film's terrific poster artwork? If you're a movie fan reading this, and you haven't seen Rudy, please don't let the spoiler of the disc's cover art discourage you from seeing this film. You will still appreciate the payoff - trust me on this. All issues related to this disc aside, Rudy is a great film and it really looks and sounds good on this DVD. This is an inspiring true story, and it's a movie that you can enjoy with the whole family. If the ending doesn't move you, you probably can't be moved. So hang up your cynicism and your fear of the "heartwarming story" and give this disc a spin. I think you'll be very glad you did. Bill Hunt