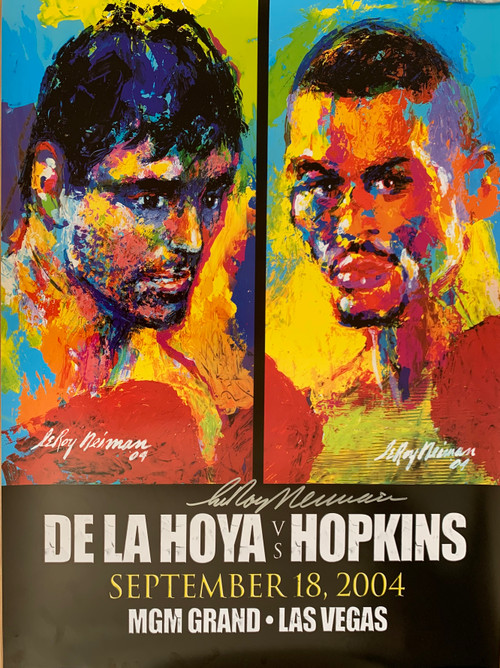 Here we have an original autographed Leroy Neiman onsite fight poster, only available at the event for the mega fight at the MGM Grand Las Vegas for the Undisputed Middleweight Title.

De La Hoya fought Bernard Hopkins (44-2-1) in mega unification match on September 18, 2004 at the MGM GRAND Garden Arena in Las Vegas. Hopkins held the WBC, WBA, and IBF middleweight titles and was considered by many to be the number one pound for pound fighter in the world. De La Hoya fought a good tactical fight, however In the ninth round, Hopkins knocked out De La Hoya with a left hook to the body, the shot was a gem, perfectly placed under the floating rib & there was nothing Oscar could do about it, he was down, in agony. It was the first time in De La Hoya's career that he was knocked out......

This authentic Leroy Neiman signed onsite poster (size 30x22) from the MGM Grand Las Vegas, is accompanied with our A&R Collectibles certificate of authenticity and a photo of LeRoy Neiman signing posters.

Buyer will receive actual item displayed in our images.