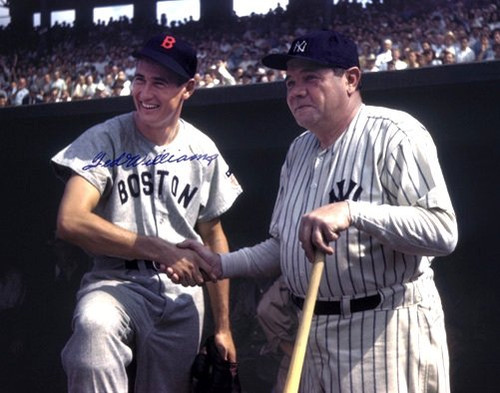 One of the most outstanding photographs you will ever come across. This beautiful 20x24 unframed photograph is of Ted Williams AND Babe Ruth.  This was the only "in uniform" photograph of these two immortals, taken on July 13, 1943 at Fenway Park.  Hand signed by Ted Williams.  This is truly special.  Green Diamond COA included.

Theodore Samuel "Ted" Williams (August 30, 1918 – July 5, 2002) was an American professional baseball player and manager. He played his entire 21-year Major League Baseball career as the left fielder for the Boston Red Sox (1939–1942 and 1946–1960). Williams was a two-time American League Most Valuable Player (MVP) winner, led the league in batting six times, and won the Triple Crown twice. A nineteen-time All-Star, he had a career batting average of .344, with 521 home runs, and was inducted into the Baseball Hall of Fame in 1966.  Williams recorded a hit 34 percent of the time; he reached base an astounding 48 percent of the time.

Williams was the last player in Major League Baseball to bat over .400 in a single season (.406 in 1941). Williams holds the highest career batting average of anyone with 500 or more home runs. His career year was 1941, when he hit .406 with 37 HR, 120 RBI, and 135 runs scored. His .551 on base percentage set a record that stood for 61 years. Nicknamed "The Kid", "The Splendid Splinter", "Teddy Ballgame", "The Thumper" and, because of his hitting prowess, "The Greatest Hitter Who Ever Lived", Williams's career was twice interrupted by service as a U.S. Marine Corps fighter-bomber pilot.  An avid sport fisherman, he hosted a television program about fishing, and he was inducted into the IGFA Fishing Hall of Fame.