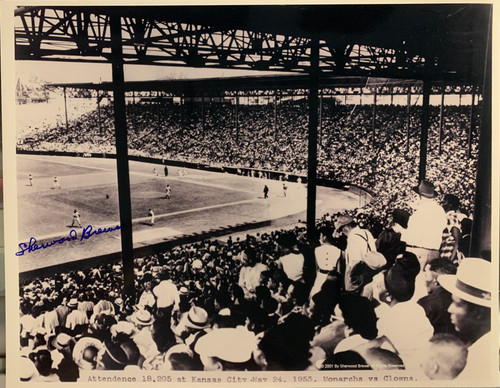 The photo shows action in a May 24, 1953 game between the Kansas City Monarchs and Indianapolis Clowns. It was copyrighted in 2001 and signed by Sherwood Brewer. In the photo, Banks is running to first base. Later in the 1953 season, the Chicago Cubs discovered Banks and signed him to a contract. The Cubs’ first black player, he became their regular shortstop in 1954. At the end of his 19-year career in Chicago, he had slugged 512 home runs while compiling a .274 batting average, and he was revered as “Mr. Cub.”

Mint condition photo, 11x14. Sherwood Brewer's signature is in blue sharpie and is authenticated by A&R Collectibles (hologram and Certificate of Authenticity included).

Buyer will receive actual photograph displayed in our images.

Footage of Joe DiMaggio hitting a home run for the New York Yankees.