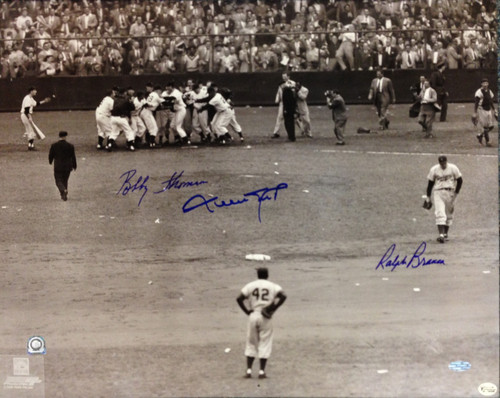 That famous call by Russ Hodges punctuated what is probably the most dramatic moment in baseball history. Bobby Thomson of the Giants hit a pitch thrown by Ralph Branca of the Dodgers into the left field seats, securing a spot for his team in the World Series and a place for himself in baseball immortality.

The play occurred at the end of the 1951 season, and it’s hard for a modern fan to appreciate what a momentous event it was. These two teams were then crosstown rivals with fans that chose sides and did so with great passion. At the end of the 1951 season they had an identical 96-58 record. The champion would be determined by a three-game playoff, and the two teams split the first two. Everything was on the line for this last game.

The Dodgers held a 4-1 lead going into the bottom of the ninth inning. But the Giants rallied, and with a run in and men on second and third, Bobby Thomson came to the plate. With a one-strike count, Thomson hit a pennant winning home run and the rest if history!!

Buyer will receive actual signed photo displayed in images.  This item is available for purchase and shipping within the USA only.