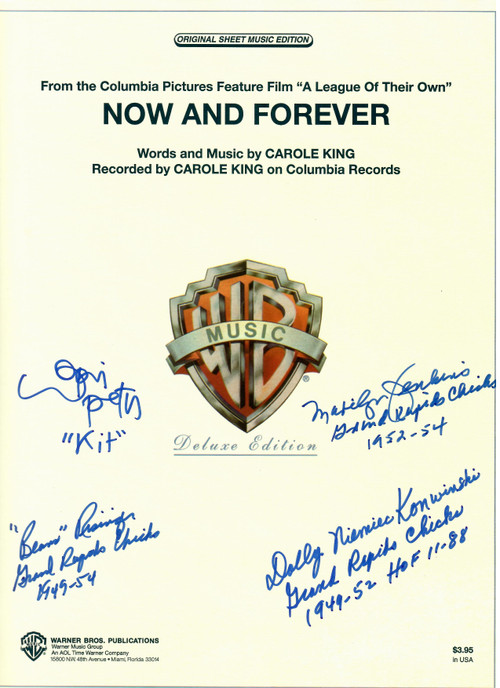 Another truly unique collectible!  Sheet Music from the Movie "A League of Their Own," signed by Lori Petty who played "Kit" in the movie plus THREE members of the All-American Girls' Professional Baseball League:

Marilyn Jenkins, former catcher who played in the All-American Girls Professional Baseball League.  Marilyn Jenkins played for her hometown team Grand Rapids Chicks during the last three seasons of the league. She started a long time relation of ten years with the Chicks when she was 10 years old, and stayed with them until the league folded after the 1954 season.

Helen Earlene "Beans" Risinger was a pitcher who played from 1948 through 1954 in the All-American Girls Professional Baseball League. Listed at 6' 2", one of the tallest players in the league's history, Earlene Risinger was an All-Star pitcher who helped the Grand Rapids Chicks win a championship title in 1953. Tall and slender, her parents dubbed her ″Beans″ because she liked pork and beans for breakfast.

The All-American Girls' Professional Baseball League was founded in 1943, created by Chicago Cubs owner Philip K. Wrigley while men were in Europe and Asia fighting World War II.  Since its 1943 season opener, the circuit developed a select group of women that changed the ballgame forever between the 1940's and 1950's.

Director Penny Marshall and screenwriters Lowell Ganz and Babaloo Mandel re-created the era when women's baseball was extremely popular. Two sisters -- Dottie (Geena Davis) and Kit (Lori Petty) are recruited to play. Madonna, Rosie O'Donnell and Tom Hanks are among the stars in the movie. By the end of the season, the team competes in the World Series.

Buyer will receive actual item shown in our image.