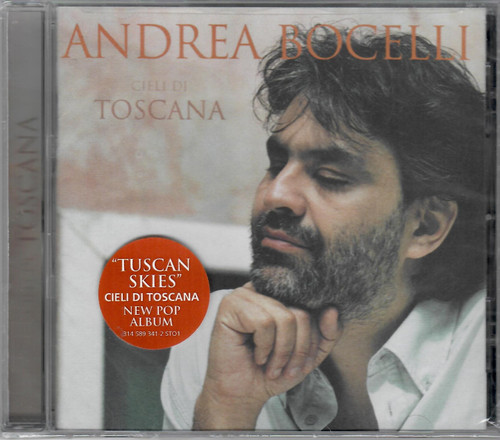 Not content with the simplistic "crossover" formula, superstar tenor Andrea Bocelli has been pursuing alternative paths since he emerged as a vocal phenomenon in the mid-1990s: operatic classics and contemporary popular song. The singer's last few albums have showcased his love for the former (including homages to his beloved Verdi: the Requiem and Verdi aria collection). But Cieli di Toscana ("Tuscan Skies") marks a triumphant return to the pop idiom last explored on Sogno, offering a highly varied series of the kind of beautifully crafted contemporary melodies that initially won Bocelli acclaim.

The familiar cast of songwriter-collaborators (including Francesco Sartori, responsible for the smash success "Time to Say Goodbye") mixes with new blood; Bocelli himself unveils his songwriting talents on "Il Diavolo e l'Angelo." It's a highly produced affair, but behind all the gloss, Bocelli sings with a newfound, relaxed, even mellow quality. There are intimately touching moments--"L'Incontro," a tribute to his first son featuring Bocelli's own poetry as read by U2's Bono--as well as soaring flights of lyricism (the duet "L'Abitudine" with Italian singer Helena). And on "Mascagni," with its quotes from that composer's operas, Bocelli makes another nod to his classical affinities. But whatever the style, Bocelli is a singer who knows how to go straight to his listeners' hearts. --Sarah Chin