Magically Control Any IR Device With a Flick of the Wrist

Bring the Wizarding World home to your family room with this officially-licensed Harry Potter Remote Control Wand! Just swish and flick to operate any electronic device that uses an infrared remote control, such as a television, Blu-ray player, or stereo. Easily program up to nine gestures that allow you to change channels or tracks, turn the volume up or down, and more. The finely detailed wand is modeled directly from the prop used in the Harry Potter films and comes complete with a collector box and comprehensive illustrated instructions. 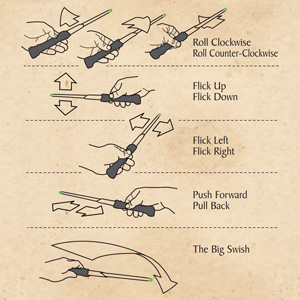 Fun and Intuitive Controls
Use gestures from the Harry Potter films to control your device: roll clockwise, roll counter-clockwise, flick up or down, flick left or right, push forward, pull back, and swish. 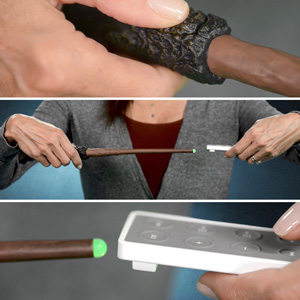 Easy to Program and Use
Program up to nine gestures with the functions of any device with an IR remote control, such as a TV, DVD/Blu-Ray, or stereo. Use it to turn the volume up and down, change channels or tracks, and more. You can also program and use multiple devices at the same time.