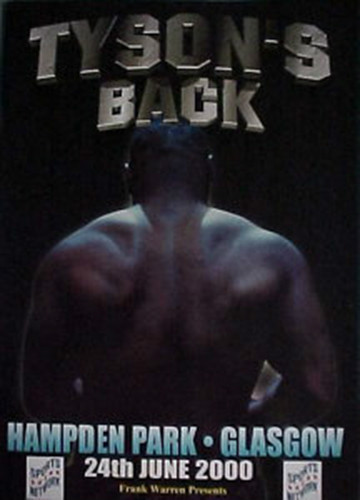 Tyson fought Lou Savarese in June 2000 in Glasgow, winning in the first round.  The fight was stopped thirty eight seconds into the first round.  Tyson continued punching after the referee had stopped the fight.   While attempting to stop Tyson, referee John Coyle was accidentally pulled to the floor by him. Tyson was declared the winner by technical knockout.

"I'm the best ever. I'm the most brutal and vicious, the most ruthless champion there has ever been. No one can stop me. Lennox is a conqueror? No! I'm Alexander! He's no Alexander! I'm the best ever. There’s never been anyone as ruthless as me. I'm Sonny Liston. I'm Jack Dempsey. There's no one like me. I'm from their cloth. There is no one who can match me. My style is impetuous, my defense is impregnable, and I'm just ferocious. I want his heart! I want to eat his children! Praise be to Allah!"

Quote from Tyson's post fight interview after knocking out Lou Savarese 38 seconds into the bout in June 2000.