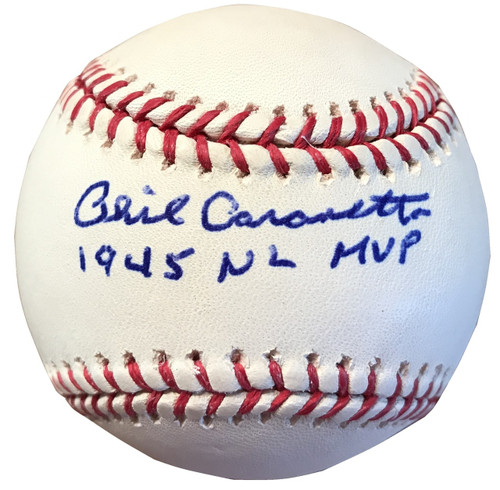 If someone were to have been named "Mr. Cub" for the 1940's, that player would undoubtedly be Phil Cavarretta. He was born on July 19, 1916 in Chicago.  While attending Lane Tech High School, Phil signed with the Cubs and at the age of only 18, made his major league debut against the Dodgers in Brooklyn.  He played for the Cubs for 20 seasons, a team record. He appeared in the Cubs' last 3 World Series and won the National League MVP award in 1945.  A&R Collectibles is pleased to offer you this unique opportunity to purchase an Official MLB baseball autographed by this Cub legend...Phil Cavarretta.  In addition to signing his name, Phil has added the very special inscription "MVP - 1945."  A&R Collectibles COA and signing photo included.

From 1998 on ESPN. All of your favorite cubbies are here & Jack Brickhouse w/2 fun stories. I wish somebody would have told me not to have dubbed and redubbed all of my vhs tapes in case I would be sharing them with a zillion people...