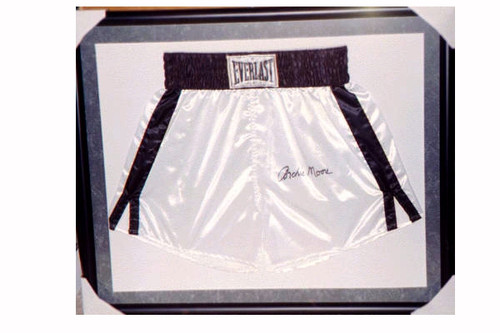 Archie Moore (born Archibald Lee Wright; December 13, 1916 – December 9, 1998), was an American professional boxer and the Light Heavyweight World Champion (1952–1959 and 1961), who had one of the longest professional careers in the history of the sport. Nicknamed "The Old Mongoose," Moore holds the record for the most career knockouts (131). He ranks #4 on The Rings list of "100 greatest punchers of all-time," and is rated by prominent boxing website BoxRec as the greatest pound-for-pound boxer of all-time.

A native of Benoit, Mississippi, Moore was raised in St. Louis, Missouri. An important figure in the American black community, he became involved in African American causes once his days as a fighter were over. He also established himself as a successful character actor in television and film. Moore died in his adopted home of San Diego, California.

At one point, the oldest boxer to win the World's Light Heavyweight Championship, he is believed to have been the only boxer who boxed professionally in the eras of Joe Louis, Rocky Marciano and Muhammad Ali. He is one of only a handful of boxers whose careers spanned four decades; his final record was an extraordinary 185 wins, 23 losses, 11 draws and 1 no contest, with 131 official knockouts.

Moore was possibly the greatest light heavyweight of all time, The wily "Old Mongoose" Archie Moore. The man who scored 140 knockouts in a career that spanned from 1936 to 1963 never lost his crown in the ring. Although he unsuccessfully challenged twice for the heavyweight title, he did campaign successfully among the "Big Boys" throughout his tenure as a professional boxer. His record reads lie "Who's Who" of boxing history. In 228 recorded bouts, Archie was only stopped seven times, a testimony to his courage and uncanny defensive ability.

A tribute to one of boxing's all time greats, the long-reigning light heavyweight champion Archie Moore. Part 1